Perama Ioannina The first reference in time for our village is made in 1378 and even today the name remains the same. According to Panagiotis Aravantinos Perama was a village when castle of Ioannina was under attack, where the bishop was the Serb Thomas Prealoumpos or Preloumpovits from Malakasio three hundred warriors, who were in the area and were roaming near Drampatovas area and where looking for a boat to carry them through the lake to attack the castle. Based on the stories told by the locals to their children and grandchildren, it is known that first arrived in the region, around the eighth century,

lived in "Saito" (shuttle) to the right of the area where the camp "Katsimitros" is now, which has as Today this name. In 1378 the lake was bigger and the waters was until "katsimitros" area. People there involved in fishing and transporting people and goods by boat to the city of Ioannina. It was namely "Perasma" (Pass) from which went to go to the city. So the village got this name that it has now days . As the lake waters recede, The residents were transferred to the first settlement of the current area, which, as mentioned, was known by the name of Perama in 1378 and said that was the 10th or 11th century. During the Turkish enslavement Perama owned by Turkish beys and agas, suffered a lot, and that's why Turkish and Albanian officials exploited their wild enslaved poor residents. The French consul in Ioannina (for Ali Pasha) and browser Pukevil F. says: "Perama home leisure vizier Ali and near-near a village of forty huts of poor Christians reside, where the vizier Ali Pasha, accustomed to people corralled like cattle, replaced by the time the mine from a population of Greeks from the Ionian islands were returning from a pilgrimage to Jerusalem. " In the most central part of the village, Ali Pasha had built summer palaces, the ruins of which, called "Konaki" rescued until about 1960. The hill is called 'Goritsa ", at which point there is the cave where the Turks had set up a defensive mechanism to protect Ioannina, pill-boxes or "Stikamia "as it is known today. The inhabitants, as many times as needed, fought with the Germans in every way and helped in the liberation struggle of 1912-13, bringing the boat people and other ammunition from the abbey to the lake Ntourachanis Lapsista hydrophilic through dense vegetation of the ropes who knew very well. Alongside distinguished for their patriotism and their militancy. Many villagers participated in the subsequent national races, both in Asia Minor and the Greek-Italian war, where others were wounded and others died for their country. 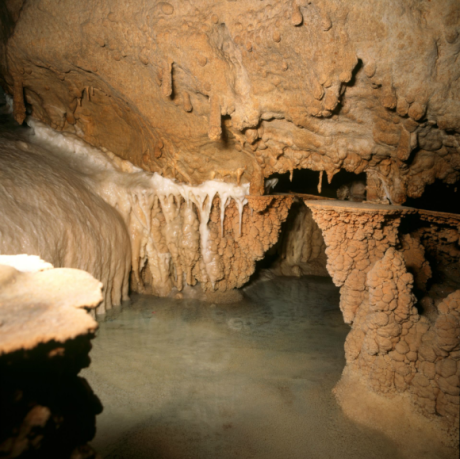 Perama Cave is one of the most important in our country since the first cave and was exploited tourist public. It ranks among the largest land caves in the Balkans and the largest cave in area in Greece. Occupying an area of 14,800 square meters, Has 19 big rooms while most of the rest of Greece has only 10 rooms. Is geologically associated with the presence and evolution of the lake. It is one of the few places nationwide where artifacts were found the bear cave. Perama Cave is particularly rich decorated by nature, which early on had said caver and geologist J. Petrohilos, making special reference to the variety of stalagmites are present. Perama Cave dated to about 1.5 million years, belongs to the limestone caves and is part riverbed where the waters of the lake covered the entire basin of Ioannina and the hill was an island Goritsas. The temperature of the interior is standard 18ºC (64.40ºF), while the humidity reaches 100%. Northwest of the hill of the Cave found iron knives, handles and shells of the 4th century BC. It is open daily during the summer season (09:00-19:00) and the winter (09:00-17:00). The tour in the cave lasts approximately 45 minutes and the length is approximately 1,100 meters. 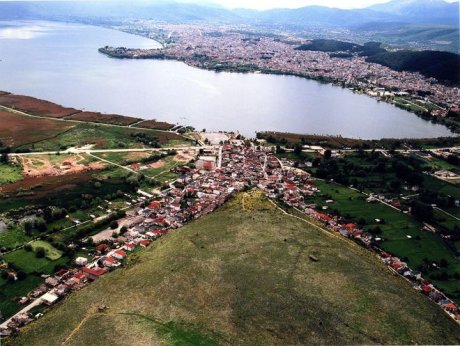 The Ioannina was the second oldest lake in Europe after Lake Ohrid, The lake is known as the pride of Ioannina. Two features characterize the lake Pamvotis: the peninsula, where castle of Ioannina is built the and the famous Island, one of the few inhabited islands in lakes. The banks are dense and the mountains of Epirus reflected in its waters. Dating from 10,000 BC and although in the past the level had decreased remarkably, today is a living piece of flora and fauna. This lake is fish farming is not famous eels and crayfish it. In the middle of the lake is a small island. On the island there is the monastery of Agios Panteleimon, which in 1822 was assassinated Ali Pasha. The lake of Ioannina is a fine and delicate ecosystem, which is the European Network of Protected Areas (NATURA 2000), «home» for rare flora and fauna, such as crayfish, wels catfish, kiprinoi, ducks, eels and many amphibians and Migration Poulios. It also constitutes an important source of life, cost of fishing for Ioannina and is also the site of a modern international sports such as skiing, boating, kayaking, canoeing etc.- The beauty of Pamvotida can be enjoyed from the Castle of Ioannina and Kastritsas the hill, and the view will be your breath away just past the exit of the cave of Perama The first and most legendary and sung story about the lake is that connects the fate of Kyra Frosini, the beautiful noblewoman Born in Ioannina which drowned by Ali Pasha in the lake along with 16 other women.